As with many things, female announcers may be an acquired taste. But once acquired they are to be savored. Sort of like caviar.

Well, we’re back after taking a week off. True confessions: my social media guru was on vacay and, being a Boomer, I still need her to hold my hand on FB and when I tweet! 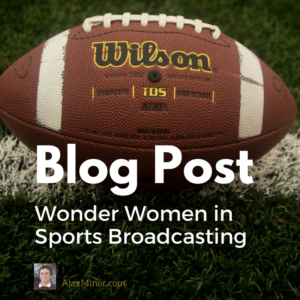 I was going to post a poem this week and talk a bit about the craft, of which I know little. But an article in the NYTimes Sports Monday section got my attention. It concerned women broadcasters in sports and the negative reaction by some male fans to having a female in the booth. The reason this was a hot topic was because recently ESPN chose Beth Mowins  to do play by play on the late Monday Night Football Game. Complaints were lodged by male viewers about her voice ranging from “grating” to “shrill” to “like listening to my ex nag at me.” Whoa!

A few weeks ago I did a rant about the weak media coverage of the women’s pro golf Solheim Cup. All of this is relevant to my writing, since as I’ve stated my stories have strong female characters. Not by design but because it’s just representative of my attitude toward girls and their role in my own life. Now I’d like to do a ‘soft rant’ about sports announcers.

I’d listened to Beth Mowins over the past few years doing play by play of college games and couldn’t understand why she hadn’t been given a shot at the pro game. So I rocketed out of my chair when I heard her voice on MNF. I happen to like her voice. Which may all come down to  personal taste; and which may be the case with the negative comments quoted above (kinda doubt it). But more than that I like  her knowledge, poise and use of her vocal talent to reflect the tenor of the action on the field.

Want to talk about irritating voices? With apologies I have to nominate Gary Koch as my least favorite voice. That being said he is also knowledgeable and highly professional. But his intonation is like fingernails on a chalkboard to me. At the other end of the spectrum we have the snoozers. As far as knowledgeability and professionalism go Judy Rankin is at the pinnacle. But maybe a hint of inflection from time to time when something exciting happens? Okay. As for the guys, Jim Nantz is also the consummate pro and, as he lives in my area, a very gracious gentleman. But I wonder what the voice over of the Hindenburg disaster might have sounded like had he been on the newsreel.

Alright, how about a few positive comments? My award for the best announcer in sports is Kelly Tilghman. She is so smooth she’s frictionless. And smart. And ANYTHING but shrill. I’ve never heard her miss a beat in any situation, the comment about Tiger notwithstanding; which I guess proves that being the best does not mean being perfect. She is great but she is human.

So now that Beth has torn the pigskin ceiling what next? Hopefully Suzy Kolber will come off the bench. Again, like Kelly, you can’t bitch about her voice quality. Smoky, low. Sexy? Broadway Joe and I would answer that question the same way and in the affirmative. AND she played football. Which is more than can be said for a terrific announcer like Joe Buck.

So I’d ask all of my buddies out there to suck it up and give the girls a chance. As with many things, female announcers may be an acquired taste. But once acquired they are to be savored. Sort of like caviar.