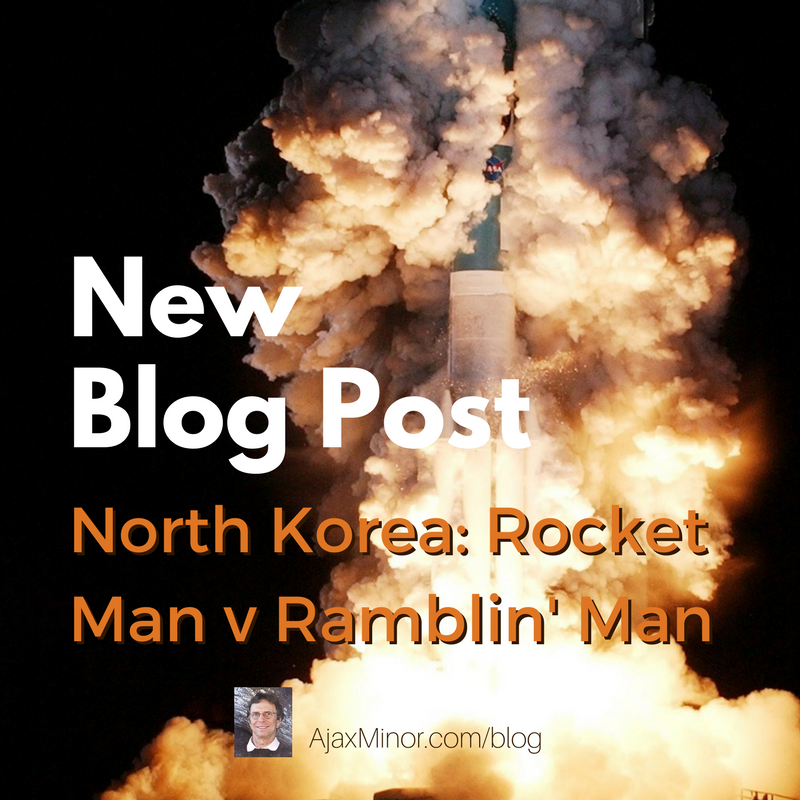 Last week I wrote about the disconnect between Trump’s actions during the CV19 crisis and his perception of himself as an autocrat. I thought I’d reprint a post about how Kim and Trump are ‘sole proprietors’ and how this has affected their behavior. North Korea is an issue I have addressed, since the first part […]

Donald Trump’s handling of CV19 is a bit of an enigma. Not just the specific policies of his Administration, but rather the lack of ‘ownership’ he has exhibited. So I thought I’d have a conversation with one of the characters in my ‘Ur Legend’ to get his perspective. Jumong had been the Chairman of the […]

Given the recent aggressive moves by Kim Jong-un and escalating tensions just about everywhere on the globe, I thought I’d reprint a post on the two main personalities in the conflict. North Korea is an issue I have addressed, since the first part of ‘The Girl from Ipanema’ takes place in the DPRK. I needed […]

We hear a lot of cries to ‘take our country back’, to ‘give us our rights as a legitimate minority’ and to ‘free us from a foreign oppressor’. The first is probably more common today rising from the ardent nationalists, the second from specific demographic groups such as religious or ethnic. The last is less […]

Ethnicity is prominent in my series, and ethnic prejudice draws from the same well as racial prejudice.

Having just returned from Florida to spend Christmas with my 92-year-old Mom, I thought it fitting to share some random thoughts.

I’m a novice at Social Media.

I wrote a Blog recently about The National Marriage: Red and Blue, a  response to a David Brooks column in the New York Times. But what about the personal side of divorce?

Last month, David Brooks wrote a column in the New York Times, to which he is a weekly contributor, entitled ‘How to Repair the National Marriage’.

Given the events of the past few weeks concerning the separation of families by ICE, I decided to jot down a few thoughts,

Last week I wrote about my own mom. This week I’d like to discuss four other mothers in my life.

In honor of this past Sunday’s Holiday, Mother’s Day, we’re going to talk about Mom. This is fertile ground for an essay

Read More
Connecting the Dots: the Cascade of Consciousness

Sometimes the mind works in subtle but wondrous ways.

We all, atheist and believer alike, must have Faith. I will tell you it gets tested when you are struck with a catastrophe like losing a child.

So much has been made this week of Mueller and McCabe and Stormy Daniels the mind boggles. But unlike previous administrations we keep being distracted by

So much has been made this week of Mueller and McCabe and Stormy Daniels the mind boggles.

Last week I said that we would talk about the great ‘Sh**hole’ moment. Or was it ‘Sh**house’? No Matter.

Is Harvey Weinstein a sexual predator? Is that a rhetorical question? Seriously.