‘The Bloodforged’ by Erin Lindsey: A Review of Book 2

This is the 2nd in a 3-part series, in which I review Erin Lindsey’s ‘Bloodbound’ series.

In yesterday’s blog I reviewed Book 1, ‘The Bloodbound’, of Erin Lindsey’s ‘Bloodbound’ series.  Book 2, ‘The Bloodforged‘, did not disappoint. In fact it showcased Ms. Lindsey’s development as a writer. In it she moved from a fairly linear plot line to at least three separate stories going on at once. 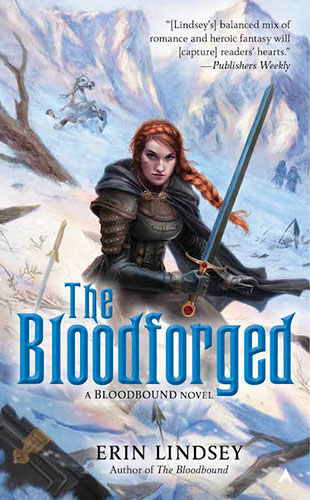 Read the book “The Bloodforged,” by Erin Lindsey

Prince Liam’s delegation to Onnan, King Erik and Alix Black’s diplomatic effort with Harram and Alix’s brother, Riggard’s, efforts at the front in the war with Oridia, which supplied a great deal of action and introduced another character whose connection to Riggard grew as the story progressed.

This juggling is a skill I have tried to execute in Book 3 of my ‘Ur Legend’ series. Readers can judge my success when ‘Kutusov’s Dream’ is published in 2018.

What Drives a Story?

Some have said that characters drive a story, some say it is plot and even some, such as Colum McCann, have said it is language. I’ve always believed that what drives a story is connection between and among characters. And Ms. Lindsey supplies plenty of that with the difficult love triangle among Alix, Erik and Liam, as well as Liam’s attraction to another aristocrat.

Humans have chosen monogamy but are not necessarily built that way.

So get ‘The Bloodforged’ on your shelf or on your e-reader and give it a go. It is particularly a fantasy for those who’ve tired of dwarves and dragons. And it’s the kind of fantasy I’m partial to since it is the kind I write myself.