North versus South and Sh**holes

Last week I said that we would talk about the great ‘Sh**hole’ moment. Or was it ‘Sh**house’? No Matter. The profanity is really not the main point. There is no argument that he was ‘tough’ on some areas. The issue is whether specific countries or regions or continents have populations that are inferior to others by certain metrics. 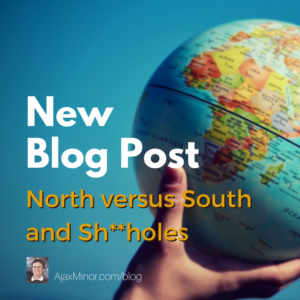 Why this is important in the context of my novels, is that ‘The Girl from Ipanema’ and the next to be released ‘Kutusov’s Dream’ deal with a world in which an ecological catastrophe has occurred and the economic shoe is on the other foot. The Northern Hemisphere is suffering from a deep freeze.

So issue relevant to both my novels and the President’s statements is, how do we view the Northern and the Southern hemispheres of the planet?

In the late 90s, during a decade of relative peace and prosperity in the developed world, there was a legitimate concern that the less developed nations, most in the Southern hemisphere, were falling so badly behind economically that the differential posed a serious threat to stability on the planet. Then something unexpected happened. Globalization, a truly Capitalist phenomenon, lifted countless millions out of extreme poverty. The following graph comes from “Global Income Inequality in Numbers: In History and Now” by Branco Milanovic, page 202, Figure 4.

But the point, apropos Trump’s remarks, is that perhaps the less developed counties to the south are not exactly ‘Sh**holes’, or whatever you want to call them.

But to further illustrate the point that the inhabitants of the continent of Africa are not pariahs, check out the links below. (Actually, some great reporting has made my job easy.)

Having read Kristoff’s piece it doesn’t get any more obvious that appearances can be deceiving. Now I know that identity politics is now a big deal.

My mom’s dad came from Wales, so I guess he gets a pass, even though he was a socialist, and her mom was an old Connecticut Yankee. Things didn’t turn out so badly for me or the good old USA with those migrations.