So much has been made this week of Mueller and McCabe and Stormy Daniels the mind boggles. But unlike previous administrations we keep being distracted by sideshows rather than focusing on important policy issues. And none is more important than the relationship between the DPRK (Democratic People’s Republic of Korea; aka North Korea) and the US. The fact that the countries’ two leaders may meet is remarkable. I have to commend Kim for extending the offer and Trump for accepting. I doubt anything immediate and substantive will result but it never hurts to talk. As my ‘leftie’ friends like to say, “give peace a chance”. Now, I’m on the left side of the 50 yard line but we have to be realistic. One element that’s crucial to understand is that reason works on reasonable people and often we are dealing with psychopaths or sociopaths. Assad, Hussein, Karadzic. The list goes on. But it’s worth the shot. However, it’s also key to manage expectations by understanding the personalities of the principals. For that reason I’m going to forget about Stormy for a moment and repost a blog I wrote a few weeks ago:

So you probably were all wondering when I’d get around talking about North Korea. 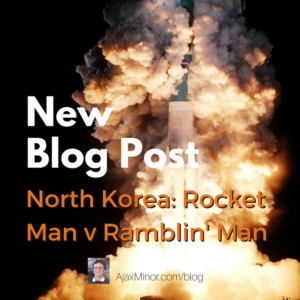 It’s an issue I should address, since the first part of ‘The Girl from Ipanema’ takes place in the DPRK. Well, I needed a country that has an authoritarian system so it would be easier for the main characters to exercise ‘extreme prejudice’, as they say, with few constraints. The DPRK is topical and, with a fair degree of understatement, controversial. Bottom line, I thought it would be fun. It did raise some hackles. One reader, who very much liked SVMM, was offended by the North Korean fighter jet on the jacket cover. And he was Canadian!

I also wanted to color the DPRK with a hopeful hue. The subtle message was that perhaps at some time in the future, or maybe in an alternative reality, a leader with qualities like Jumong might emerge to lead the country into the light. In my mind, there is good precedent with Lee Kwan Yew, who led Singapore to prosperity and a degree of freedom with an iron, though enlightened, fist.

Jumong and his evil twin, Kang, present an interesting juxtaposition. While Kang is manipulative and, one might say, a bit of a psychopath, he is also a realist who knows it is only Jumong the people will follow. Jumong, though far more thoughtful and empathetic, lacks the drive and ruthlessness to feel at ease running the whole show. But both seem to care, in very different ways, about their country.

What about the two individuals currently locking horns, Kim Jong-un and the Donald? Are they psychopaths, sociopaths or really geniuses playing three dimensional chess while everyone else is playing checkers? I’m going to exercise editorial privilege and rule out the ‘genius’ thing. Kim certainly seems to have the credentials to lay claim to being a psychopath, if reports of his liquidations are true.

There are a number of articles that can be Googled on psychopathy and political leaders, CEOs and generals. So many I leave it to the reader to choose their own. But the point has been made that one of the characteristics held in common by all three of the classes mentioned is their propensity to view people as objects who exist only for their own aggrandizement. I think both Kim and the Donald probably share this trait in common.

But I’d like to make an additional point about Trump that hasn’t been raised. He came in heralded as a businessman that could straighten the country out, rather than having it run by bureaucrats and a bunch of ‘First thing, kill all the’ LAWYERS’. But the distance that separates Trump from, say, a Rex Tillerson may be wider than that which separates either from the professional class. Trump IS a businessman but not a corporate exec. He has been a sole proprietor. Now Sole Proprietors are different ducks. And I know. Both my father and my father-in-law were effectively sole proprietors. Sole Proprietors answer to no one. They have absolute power and often exercise it. Many are also tyrants. They rule by fear. My father would sometimes rule by reason and at other times would take a problem employee out back for a good right cross. My father-in-law didn’t resort to physical coercion but would belittle, berate and leave those who worked for him never sure they had made the right decision and always afraid they’d made the wrong one. ‘Wrong’ being defined as a choice their boss didn’t like. Tyrants like to keep their minions off balance.

So neither Trump nor Kim may be chainsaw wielding psychopaths (yet), but either have been or behave as if they have been tyrants and sole proprietors.