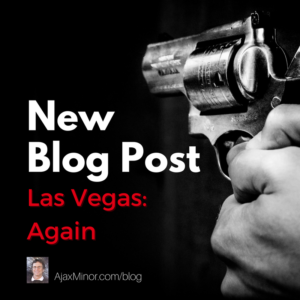 Sadly, I have to reprint a blog I wrote after the Las Vegas massacre. Here we are again. There is, ultimately, a tradeoff between Liberty and Security. I’m not sure it’s correct to judge the emphasis as either right or wrong. And I’m not an ethical relativist. There are, simply, people who wish to live in very different social and political cultures. I feel our differences may be irreconcilable and that we might end up like the USA I describe in my novel, ‘The Girl from Ipanema‘. Would that be all bad? Sometimes it’s time to call a relationship a mistake and move on.

This blog is not a place to muck around in current events; there is plenty of that out there already. I usually write about theoretical or general issues rather than topical. However, when current events are related to my work, I feel there is justification in publishing my thoughts related to what’s going on.

Once again, I believe that current events are relevant to my fantastical fiction—especially the recent shooting in Florida and the subsequent debate about gun rights, with respect to my second book, “The Girl From Ipanema”—and I wanted to write about that here.

The Girl from Ipanema is set partly in a ‘World turned Upside Down’ (hence the subtitle), by an ecological catastrophe. After the Apocalypse, necessity forces a rupture in the political geography of the USA. Boundaries are drawn based on both economics and culture. Some of the new divisions are known as:

Could such a thing happen here?

Yes. There have been cries for secession from such politically polar opposite places as Texas and California. But there is a deeper reason. THE United States of America almost didn’t happen at all. In fact, we were initially referred to as THESE United States. Ratification of the Constitution, though unanimous among the original thirteen colonies, was a closer run thing than is widely known. An excellent book on the subject is Pauline Maier’s Ratification.

There has always existed a deep philosophical divide between the proponents of States’ Rights and a central Federal authority. This tension was very much at the root of the problems that resulted in the Civil War and that same tension exists to this very day.

Which brings us to the Second Amendment, a touchstone for both sides of the political divide and symbolic of the wide gulf that still separates us in America. Once again, sadly, we have had to talk about gun rights and gun violence in the aftermath of the Florida massacre.

We are more divided today than at any time since the period leading up to the Civil War. Certainly, differences were expressed more violently during Vietnam, but once the last chopper took off from the rooftop of the American Embassy in Saigon, it felt as if much of the raw animosity took off with it. Today, polarization goes deeper and reflects a difference in philosophy dating back to ratification, as I have said.

One solution would be to declare the American Experiment a qualified success (or failure) and hold a Constitutional Convention to redraft a governing document. Not ready to go there? We might at least think of rewriting the Second Amendment to once and for all establish gun ownership as an individual and inviolable right and, at the same time, set well defined and reasonable limits on firearms.

What is wrong with the Second Amendment?

What is wrong with the Second Amendment anyway? Let’s focus for a minute on form rather than substance.

The Constitution proper is one of the driest, and therefore most clearly written documents in our history.  Only the General Welfare Clause, in Article 1.8, has any wiggle to it; and for reasons explained obliquely by Hamilton in Federalist 34.

However, while some of the Amendments are a bit more syntactically muddled than the Constitution proper,The Second Amendment is probably the most poorly written. Is ‘militia’ part of a list or is it a qualification? Who knows? The Supreme Court waffles over time. Neither gun control nor gun rights advocates should feel comfortable with the language.

A well regulated Militia, being necessary to the security of a free State, the right of the people to keep and bear Arms, shall not be infringed.

However, it occurs to me that recent events have put its broadest interpretation, by the N.R.A, into conflict with another part of the Constitution proper. The Preamble, in which it is stated that one of the purposes of the document is to ‘insure domestic Tranquility’. It is true that only one case, ‘Jacobson v Mass (1904)‘, directly based a claim on the Preamble; and it has often been stated that the Preamble has no substantive power. That it is not a statement of Law. Perhaps not but it is, at the very least, an issue of equity, in the legal sense.

Perhaps it is time to reconsider the Preamble.

Domestic Tranquility is in Dire Jeopardy

The Founders were disciples of Hobbes and Locke and Rousseau in believing that the purpose of the Social Contract was to protect individuals against direct threats to their persons and property resulting in the State of Nature.

I believe the Preamble is the foundation upon which sits the entire structure of the American Social Contract and that ‘domestic Tranquility’ is in dire jeopardy.

So do we go down the road followed by the United States in “The Girl From Ipanema,” or bite off a small piece of the problem, the Second Amendment, fix it, and figure out a way to swallow it?