We all, atheist and believer alike, must have Faith. I will tell you it gets tested when you are struck with a catastrophe like losing a child.

I wished everyone a Happy Easter yesterday on Facebook and Twitter. I’m guilt free using Facebook since I’m guessing Cambridge Analytics wouldn’t care a bit about the holiday. Well, honestly, I never got much out of it either. 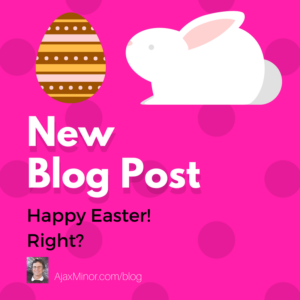 As I said yesterday, the juxtaposition of Bunnies with Eggs is strange and borders on disturbing. Besides that, my memories are of being stuffed into an overly heavy and uncomfortable sport coat and tie, on an overly warm and sunny day, and sitting in a stuffy room with relatives. The ham was always a bit salty and desert was made by Grandma Jen (yup, basis for the same character in Sun Valley Moon Mountains). Now, Grandma Jen was the all-time best pie baker on the planet. Always used lard crust! But for Easter it was Paradise Delight: pineapple chunks and marshmallows. Not bad, but like Bunnies and Eggs, an odd combo.

Christmas is a different story. All good! Of course, historians now believe Christ was born in the Spring. How they figured that out I haven’t Googled! But it is nice that Christmas cards all have a touch or more of fresh white snow rather than thick mud. And it’s pretty easy to figure out the switch. Christmas was rejiggered to occur at the Winter Solstice (which also features prominently in SVMM), a pagan holiday. Take away people’s parties and it might be difficult to recruit. Which of course left the Vernal Equinox, Pascua, free for a romp. (By the way, Easter appears to have been seasonally accurate.)

What about Easter as a religious observance? Resurrection certainly would be a cause for rejoicing. But it requires Faith. What about Pagans? There is an abundance of pagans and pagan deities in Sun Valley Moon Mountains.

So what do I think about paganism? Hint: Linda and I celebrate the Winter Solstice every year. But (NO SPOILER) Jesus also makes an appearance in Sun Valley Moon Mountains.

What about Faith then?

Faith is important, epistemologically, since we can’t verify every ‘fact’ with direct observation. So we all, atheist and believer alike, must have Faith. I will tell you it gets tested when you are struck with a catastrophe like losing a child.

But I’ve written about my and Linda’s experience before: God, Grief and the Tao te Ching. So I won’t belabor that point.

Linda’s dad, Willie as we called him, was a practicing Presbyterian. Went to church nearly every Sunday. Read the Bible at night. Served as Deacon of his church.  Many years ago, Willie (now deceased), turned to Linda and me and said:

“You know, I pretty much buy into the whole Christianity pitch. But two things bother me.”

“What would they be?” we asked.

“Immaculate conception and the resurrection.”

We said, “Willie, that’s pretty much the whole deal!” He humphed.

So what do YOU think about Easter?