‘Letters to Alice’ by King Grossman: a Review

This week and next it will be my pleasure to publish reviews of books by two authors, local to the Monterey Peninsula, King Grossman and Steve Hauk. The books are special not only because they are ‘local’ but because both are especially good! It is truly amazing how much great writing is penned that doesn’t always make it to the Bestseller List. But read the review, then read the books and jusdge for yourself.

Following is a review of King Grossman’s ‘Letters to Alice’: 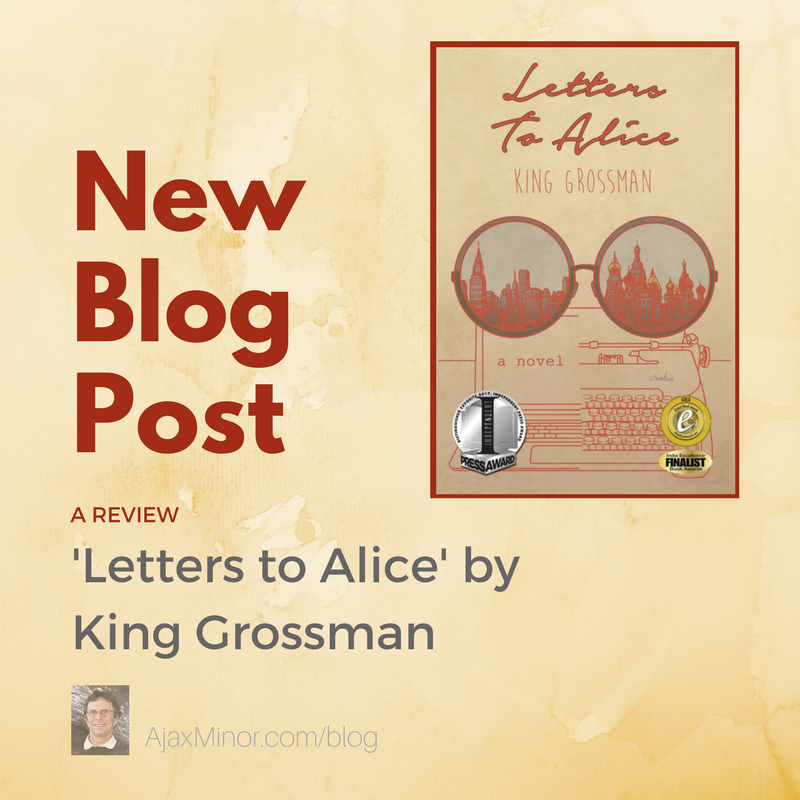 In a word, my reaction to King Grossman’s novel, ‘Letters to Alice’. It is about artistic endeavor, mostly about writing, and the need for a ‘muse’ to drive inspiration. I am a writer, as Ajax Minor, and had never really thought about the importance of a ‘muse’. I’ve never had one, as far as I know, and have only drawn inspiration from real life. Other artists have heads bursting with ideas, such as Picasso or the Beatles, and may need neither muse nor personal history to motivate. Not being a genius I wouldn’t know. But Grossman’s characters’ search for muses embeds a central question in the book: Is it possible to have more than one muse? And in a practical sense, can a person love more than one other man, or woman. The answer seems to be ‘yes, but not without complications and pain’.

The really brilliant aspect of this book is its construction as a novel within a novel. One story is contemporary and concerns a couple, Frazier and Margaret, writers, struggling to improve their art and also their marriage. The other is about, and it appears written by, Margaret’s grandmother, a novelist in Stalinist Russia.

There are not many books written this way. ‘Grapes of Wrath’, ‘War and Peace’, ‘Moby Dick’ and Updike’s ‘Memories of the Ford Administration’ come to mind. It is a real skill to pull this off, but Grossman does! And while the two books within ‘Alice’ are very different in style, the voice of the writer is the same. Deeply involved with his characters.

Colum McCann in ‘Letters to a Young Writer’ claimed that language drives a story. I was skeptical. I don’t view my own writing that way. But ‘Alice’ proves his point. Frazier and Margaret, and especially Frazier, are self absorbed. So there is a lot of self reflection. Thus the prose is dense. It has to be. The only quibble I have is that it could use a bit of thinning.

Also, Grossman’s metaphors are terrific and that is a gift. But sometimes the metaphor can distract readers and not allow them to paint the scene in their own minds. That being said it is highly readable.

As for the parallel story, the main character, Katya, is other directed and the prose is cleaner, more direct. And I’ll have to admit to a fascination with Russian and Soviet history, so I was hooked.

Bottom line, buy the book and read it!

P.S. This week on FB and Twitter I’ll be discussing topics relevant to Soviet and Russian history.