Who Knew? : Red and Blue

I’m a novice at Social Media. One of my previous Blogs and subsequent FB posts appeared not on FB but Instagram (yes, be careful; this can happen). My SM Guru (that’s Social Media, NOT, well you know…),  decided that we should reBoost to FB last week. The post was a riff on my essay in a previous Blog on The National Marriage: Red and Blue.

I posted on FB that parents now consider political affiliation more important in how they view their child’s choice of a life partner than religion, which dominated opinion fifty years ago. The picture accompanying my comment asked the question: Have we Lost our Minds? 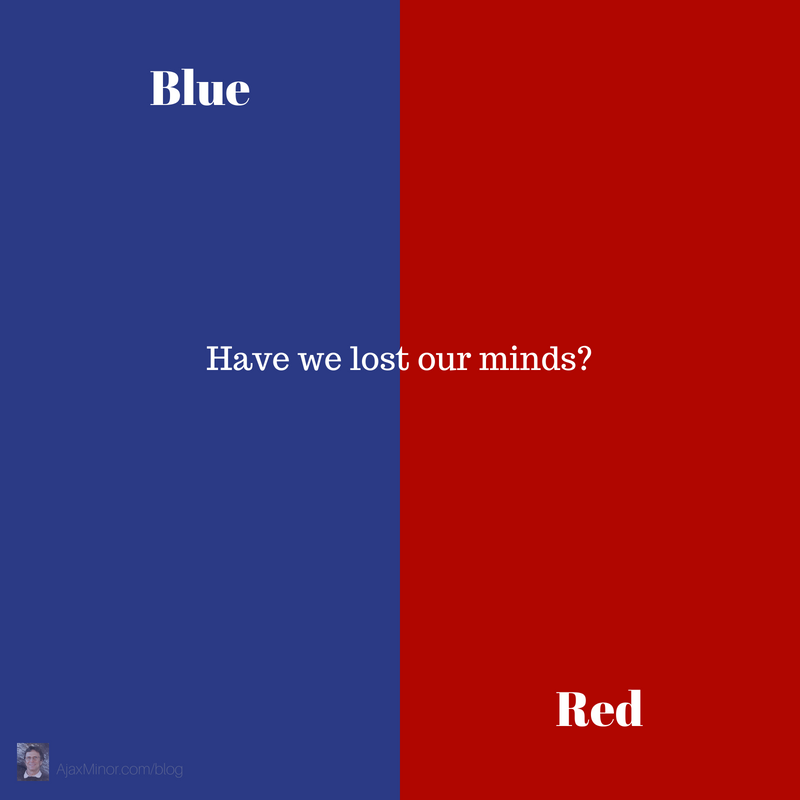 To my surprise the Post drew a bit of a firestorm. I’ve written on a number of topics that could be considered volatile: guns, God and the like. I always try to make any comments of mine germane to the subjects in my Fantasies. In my second novel, The Girl from Ipanema, I paint a picture of a dystopian future shaped by an ecological catastrophe, and in the story the USA fragments into a number of small republics defined not only by geography but by belief systems. So I thought my Blog germane.

I was not prepared for the reaction. I’d heard of this kind of firefight on social media, but now I was in the middle. Some comments were thoughtful:

You’d think morals and ethics would top the list

Seemed reasonable to me. And:

Neither religion or party is important. The important thing is how they treat your child.

With you on that one. Then things got interesting:

When you consider that Republicans prefer wishful thinking to scientific theory and have no problem with a foreign adversary interfering in the sovereign affairs of our country, it makes you wonder; or how a party that once followed a consistent political ideology has suddenly cast it aside to impose tariffs and spend money like there’s no tomorrow it also makes you wonder

Actually republicans are rooted in facts. Russia did not change a single vote in 2016. BO even said so. So this Russia thing is a smoke screen for illegal action at DOJ and FBI to cover up for Hillary’s criminal negligence with classified intelligence material and the coverup that followed.

As far as science, I assume you refer to the ocean level rise that hasn’t happened and the amazing failure of the artic poles to melt. As far as spending money, talk to me in 8 years if the debt goes up by $10 Trillion. Otherwise BO retains the record for waste and fraud.

So one Reply launched what a specialist in group problem solving called “a heat seeking missile”. I Replied that I appreciated the fact that the respondents proved the point of my Blog about National Divorce and my FB post. But how quickly things got off the rails was interesting. We see this all the time. A general statement can send people off in a number of directions on specific issues to ‘prove’ their point. This got me to thinking about how we form personal philosophies that support our policy positions.

Well, I guess I could write a book about this and many certainly have been. One answer is that there were key people in our lives, or key experiences that gave shape and give substance to our beliefs. I read one in college: Political Thinking and Consciousness by Robert Lane.

A fun read (not worth the $700 for hard copy but you can get the paperback for a buck and change). But certainly there is truth in the notion that we tend to adopt belief systems around which we grew up. One respondent to the FB post wrote:

Yes and I am not religious but red or blue doesn’t work either. Teach your children to free think.

True enough. But of course we know that ‘free thinking’ is hard work. That is, divorcing our thought process from ideas heard as children and adolescents. I grew up in a family where a Great Grandfather was a Socialist and emigrated with his family from Poland at the turn of the last century to escape Bismark’s ‘Anti-Socialist Law’. And a Grandfather,with distinctly Socialist views, emigrated from Wales. My maternal Grandmother was a Connecticut Yankee and a diehard Republican. Boy was it fun watching the news at their house. Within five minutes of Cronkite signing on they began a vigorous debate, to put it mildly. But they loved one another and got along otherwise.

So did this environment affect me? As a matter of disclosure I land on the Left side of the political 50 yard line. I was closest to my maternal Grandma but ended up with different views. However, being honest, I’m sure what I heard as a kid affected me.

I think it’s important to step back and try to figure out WHY you believe what you do. Do we have a viewpoint on Nature versus Nurture? The Left preferring the former and the right the latter explanation. The debate can be summarized succinctly  in the following song from West Side Story:

What do you think?

A single experience can shape or even change our worldview. My wife Linda worked with clients in Latin America during her career in international banking. Her exposure to the extreme poverty on that continent changed her views on religion and politics. Having grown up conservative and a regular at Church she began to question her belief systems.

Speaking of Church, God now seems to get into politics all the time. One person wrote:

I agree. It seems as if compromise on a number of issues gets pushed aside as the debate slides into an exchange of views on other more thorny problems. Why would we ever agree with anyone who defends/opposes gun control? It’s as if our discourse makes people view one another immediately as ‘enemy’, much as armies wore different and brightly colored uniforms in the eighteenth century so they would be sure to shoot only the enemy. Why discuss Infrastructure with someone who supports/opposes Abortion?

But God does always seem to get into any political discussion, eventually. One person wrote:

Suffice to say that if the full truth were preached in the fullness of God. Democrats couldn’t stay in the pew long without repentance.

I’ve gone over 1000 words and if you’ve made it this far you’re probably exhausted. But do try to quietly reflect on where your views on topical issues come from and why groups of people affiliated with liberal or conservative views all agree on the same, seemingly disparate issues.

Examine your own personal history, examine critically your important belief systems and test them in a very hot crucible.