Gone Fishin’: To Dry or not to Dry

There are three basic types of fly used to lure the fish: Dry, Wet and Nymph. I really don’t know much about wet flies since I’ve rarely used them. When we asked our guide buddy, Scott Schnebly of Lost River Outfitters, why we never fished ‘wet’, he said we could but the fish tend to be much more aggressive when smacking a wet fly, meant to imitate a small fish.  This means they are more likely to swallow the fly and this decreases the chances of the fish being released tired but unharmed. 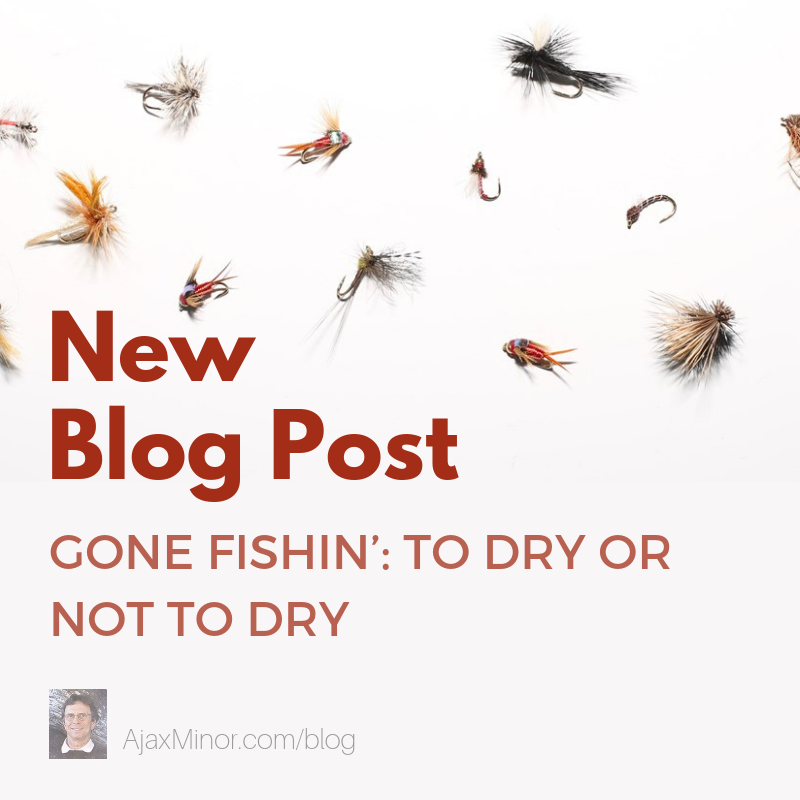 I would suspect that the battle between those who prefer dry over nymph and those who choose the reverse has been raging since Isaac Walton published ‘The Compleat Angler’ in 1653. Although it’s probably fair to say that the argument is imbalanced, since I’ve rarely met a ‘nympher’ to disparage or refuse to fish dry fly. However, I’ve met many anglers who will throw nothing but a dry. So what’s the big deal?

In general, when dry flying you tend to identify your fish, your target, then ‘present’ the fly to it to eat. Usually fish feed on dries when there is a specific insect hatch, say a Betis or a Trico hatch.  So one of the things you try to do is ‘match the hatch’. That means selecting a fly which will float on the surface and reflects, in general size, shape or color, the insects hatching. The clearer the water and the calmer the surface, the harder it is to get your fish to eat an imposter. You get away with more in the faster moving water when nymphing.

Nymphing is often criticized as ‘blind fishing’, because you will try to find water that ‘looks’ fishy. This includes ‘riffle’ water, water at the head or bottom of a pool and seams between currents of different speed. The big guys always prefer the slower water. Fewer calories expended per calorie consumed. While it is true that you are playing at probabilities, since you can’t see your fly under the surface, nymphing requires intense concentration. The fish might eat your fly at any point during a float of several tens of yards. Sneeze and you may have missed your fish. Dry flyers wait for their prey to stick its snout above water and sip the fly; and they know where their fish is holding.

However it is possible to ‘hunt’ while nymphing. Linda and I often hand our rod off to the other while fishing. The tackle free angler can sneak up on a promising pool and direct the cast:

“Okay, you hit him right on the head! 10 feet farther and a little righter” (anglers take philological liberties).

I’d also say that casting accuracy is preferred when dry flying and technique is paramount in nymphing. Your nymph is always attached to an ‘indicator’, which may be a dry fly (and may get eaten itself, telling you something about the right insect to throw) or a flashy, floating piece of plastic. As a result your line has to contend with more wind resistance and the probability is increased of piling a cast up or tangling up your leader, to which the fly is attached.

Another advantage of nymphing is that you won’t have to head back to the car if you don’t have the right fly or there is no hatch. Nymphing guarantees you a shot at landing a fish, provided you don’t have the wrong fly, wrong water or left your ‘cast’, like a golf swing, at home.

As you can probably tell I’m a nympher, as much as I like throwing dries. Either way angling is a different kind of hunt. You actually contend with another life force when you engage your fish.

And when you land a fish from a stream, unless it is a little ‘dink’, hold it gently against the current before releasing it so it can recover and suck up some oxygen. Catch and release in a river makes sense. Streams are hard environments. Food is less plentiful than in a lake and the fish expend a lot of calories fighting the current. Leave your fish for another angler. Linda and I have caught the same fish in the same water on successive days!