Gone Fishin’: Culture Wars and Rage on the River

I’ve been writing about fishing for the past few weeks. How I got interested in the sport, some details about the art of fly fishing for trout and have posted gorgeous pics from the trip Linda and I took to Idaho in early October. 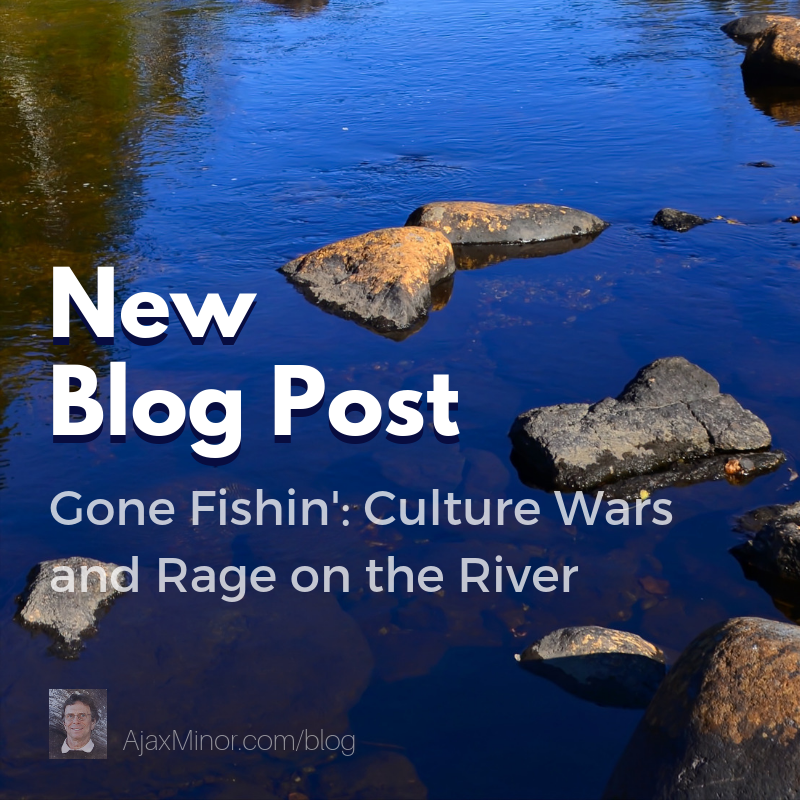 Fishing is an avocation that relaxes one through the exercise of intense concentration while casting and retrieving your fly followed by the thrill of releasing your fish and then taking a moment to soak in the sounds of the stream and beauty of the landscape. So what could ever go wrong?

In October Linda and I fished one day with our guide and buddy Scott Schnebly, owner of Lost River Outfitters in Ketchum, ID, on the lower Wood River. It was a spot called Stanton. Special fishing holes on a river may acquire monikers like ‘Tire Poppin’ Pool’, ‘Cliff Pool’ and Stanton. As with many pursuits, there are certain rules of etiquette. In fly fishing, or any type of fishing for that matter, you usually are allowed to fish a ‘run’, which is a bit of fast moving water that may have a deeper, quieter pool at its head or tail, without another angler wading into or casting into your ‘water’.

We were working our way up a ‘run’ to a pool at its head, casting upstream, when a man and his wife set up their beach chairs on a spit of land above us and began casting into the pool above us.  Good form would have been to work the run just above ours, especially on a river that might be large, but not HUGE like the Madison in Yellowstone. Maybe twenty yards wide. We were having some success with both Rainbow and Brownies and excited to see if there were a few ‘bucket jaws’, big boys, in the pool, but the couple had taken that water. And once disturbed by an angler a piece of water or a pool might scatter the fish for hours.

Our guide told them they should move upstream, as this was our ‘beat’ at the time. The fellow replied that there was plenty of room for them. Not really quite accurate nor good form. Scotty became a little hot and told him to move. Now we got a chance to see the ‘culture wars’ we are engaged in, in the US, play out on a river. ‘F-bombs’ were launched and the fellow, who was using spinning gear, said he’d had it with goddamned fly fisherman.

Now there is a bit of friction between spin casters, especially bait fisherman, and fly fishermen. Some bait boys think the fly casters a bunch of elitist snobs. It is true that fly fishing is a more expensive pastime. You usually stand in water, not on a bank, and therefore need waders and boots, and vests for flies, leader and perhaps a pair of forceps to extract your fly from your fish’s mouth. This fellow said he hadn’t seen anything this bad in Vietnam, playing that card, and besides, his wife had had a stroke and couldn’t walk upstream. Although she had been perfectly capable of walking down a steep bank to the river. Whatever.

I really thought the two would cross the stream and come to blows, so I began shouting for everybody to calm down. Which they did. To defuse things I asked the spin caster what he was using for a lure. EARTHWORMS, he said. We chatted for a minute and then he apologized for his language in front of Linda and that was that. He left a few minutes later and we walked upstream and left the pool in peace.

Okay, I fly fish now. But I grew up and with spinning rods and thoroughly enjoyed that sport. And, honestly, I really don’t feel ‘elitist’. Yes, I went to Princeton and worked on wicked Wall Street. And, yes, I’m a damned Democrat. But I’m no better than the next guy. Hell, it’s not like I discovered a cure for cancer. If we would all follow a few rules of common courtesy we’d be better off. Ya think?

Finally, why did I capitalize EARTHWORM? Because in my opinion they don’t belong on a river. Rivers are very sensitive and difficult environments for fish. They are much less productive of trout than a lake. A healthy river may have 600 fish per mile, while a lake may have thousands per acre foot. And when a fish takes a fly it usually is hooked in the lip. But trout tend to swallow live bait, and so extracting the hook without killing the fish is nearly impossible. It’s true that many anglers like to ‘kill’ their fish, take their limit and have them for supper. I get it. But take them from a lake if you can. Besides, rivers can contain harmful pollutants, which probably aren’t good for your health.

In Colorado, where we lived for two decades, the rivers can have arsenic from gold mining. So for the sake of the fish, the river and your health, take your fish from a lake or maybe just go to the fish counter at Safeway.