Icarus Rising by N.W.Moors: A Review

So do you like mythology? Particularly Greek mythology? And did you like American Gods by Neil Gaiman? How about American Gods with a smile? How about Romance? If your answer to any of these questions is YES then you should read ‘Icarus Rising,’ by N.W.Moors. And if you didn’t answer YES you may still want to read the book. You might develop a new fondness for myth and legend. 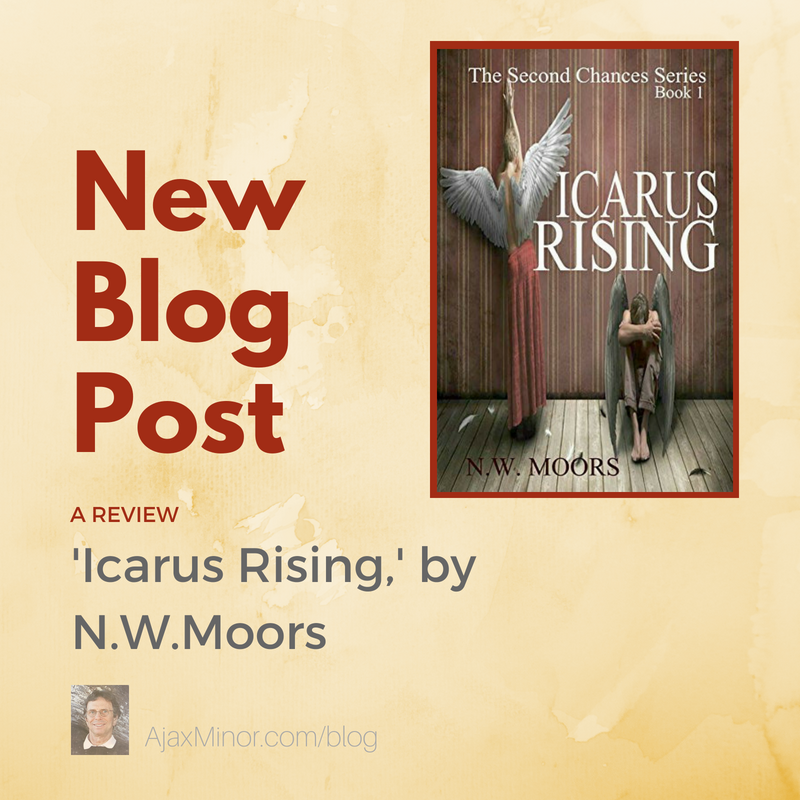 In the original story, Daedalus, an inventor, angers King Minos and has to get his butt out of Crete. So he invents a pair of wings which contain wax. He tells his son, Icarus, to fly at a ‘middle height;’ not too close to the sea or his wings will become damp and heavy and he will plunge into it and not too high otherwise the sun will melt the wax. Well, Icarus is the typical boneheaded kid and gets cocky, flies too high, the sun melts the wax on his wings and he plummets to his death in the sea. Later Daedalus builds a temple to the sun god, Apollo.

Well, Moors puts a twist in the story and it turns out Apollo holds a grudge against Icarus’ arrogance, as does his sister Artemis, goddess of the moon. He is forced to suffer a set of wings that pop out of and back into his body in a painful process. What makes them POP? That’s part of the fun of the story so you’ll have to read it! Anyway, poor Icarus wanders around Hades for a few millennia but then is given a ‘Second Chance,’ is sprung from Hades and lands in the 21st century. After that things get very interesting. But nobody likes spoilers and when I review I avoid synopses. You can go to Amazon for that, so let’s talk about the book and the writing.

Moors’ prose is clean, clear and direct. It is especially fun to see how the ancient Greek gods, Apollo, Athena and Artemis deal with life in our century. The characters develop. And for those of you who have followed my blogs, you will know that I believe it is not plot or character alone that drive a story but rather character development. Character development not only drives a story but is a mark of good writing. And it isn’t only the gods that grow but also Icarus and a young lady and bookstore owner in Devon, CT by the name of Eve.

If I had one quibble with the storyline it is that I would like Icarus (aka Russ) and Eve to have found themselves in one more really bad jam. But I won’t quibble. I’ll just tell you to buy the book.

Oh, and I should say that Icarus Rising is the first book in the Second Chances series. I like second chances, as is evidenced by my own fantasies, and the next book will have a protagonist that is especially near and dear to me. So enjoy Icarus and save some room for Book Two!