“Fish have to eat every day.” That’s what our guide and buddy for over 30 years, and owner of Lost River Outfitters in Sun Valley, ID said. Sounds reasonable. Why would I ask such a dumb question? 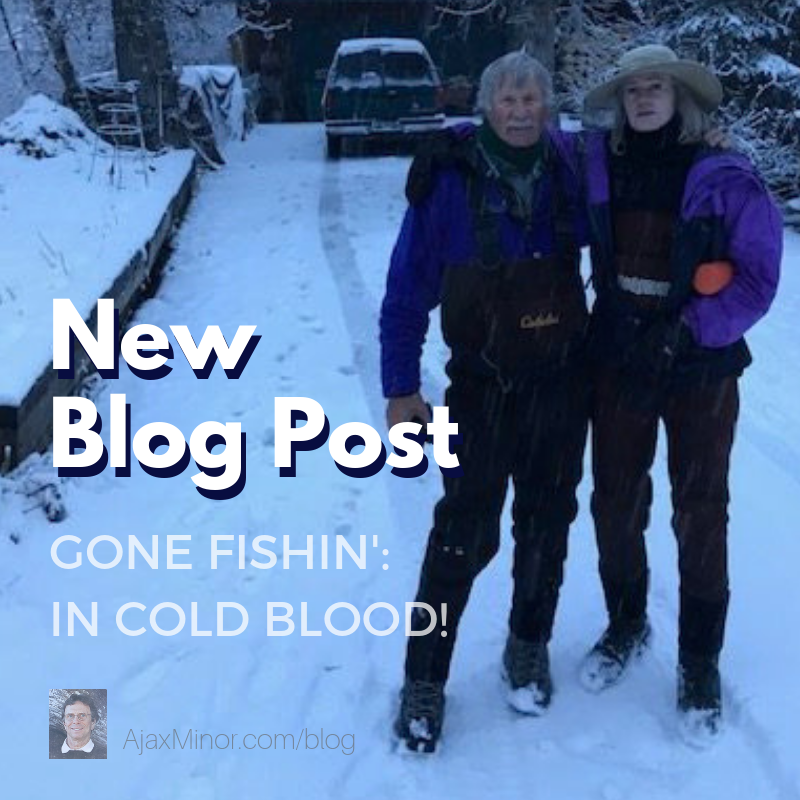 It was the day after Thanksgiving and Linda, Scott and I were standing thigh deep in the Wood River. The temperature was in the 20’s and it had begun to snow. Fish, of course, are cold-blooded animals. We have fished in Sun Valley before in February, but I guess I assumed that fish, like bears, endured the winter in a state of torpor and would awaken briefly to eat. Not so.

Which is good news if you are an angler in search of a thrilling, though chilling, experience! Winter fishing is not for the faint of heart, but it is worth the numb toes. In the dead of winter it’s usually necessary to hop out of the river every 20 minutes or so to thaw out. But November wasn’t quite as frigid. So we three would stand together and Linda and I would pass the baton, or rod in this case, off to one another after each catching a fish or two. Or if they were on the smaller side, 13-15 inches, maybe every third fish.

Surprisingly, you won’t feel the cold when throwing at your target or retrieving your nymph. Nymphs, which float subsurface, are the ticket in the winter. Betis do hatch all year but may not be ‘on’ any given day. The prime winter insect is the midge. And, yes, the bug is exactly like its name. SMALL. Since they are tiny, if you want to go dry you lift if you see a rise anywhere near where you expect your fly to be floating. If they are ‘on’ and you are with an experienced guide, midges can be a blast. But nymphing is really preferred.

There is truly something magical about throwing your fly as the snow swirls around you; as the nymph lands on the surface of the stream amidst a whirl of white. As I’ve often said, intense concentration is mandatory while throwing and retrieving. You may think the fish are a bit dopey from the cold, but I lost two big fish, Brownies I think, since they didn’t go aerial. Those fish were on their A-game.

But once you’ve landed and released your fish, and handed your tackle off to your fishing bud, Linda in my case, it’s worth it to just, well, look around and soak in the scene. That day on the Wood, as the snow swirled in squalls, I looked up at the steep hillside on the far side of the river and imagined I was in a chapter from Lord of the Rings. Spruce and Ponderosa covered the slope, and scattered about, all the way to the top, were outcroppings of sedimentary rock, deep red like smoldering logs and triangular, spiking up like dragons’ teeth.

While the fishing can be good (we ‘stuck’ around 50 fish and landed 30), that doesn’t mean there aren’t challenges to winter angling. First, leave the summer weight waders in the basement and get a good pair of Neoprene waders, which are kind of like wetsuits. A couple pairs of gloves aren’t a bad idea either, as it’s easy to get them wet when retrieving line or taking the hook from your fish’s lips. Wool hats are recommended. Finally, it’s mandatory to have a beverage to warm you up. Scott usually has a flask of bourbon or scotch at the ready after we quit. If you don’t drink alcohol, have some hot tea in a thermos to take off the chill.

Winter fishing isn’t for everyone but if you have a thick skin and a warm heart it can’t be beat. Here’s Scotty and Linda after we got out of the water just before dusk: 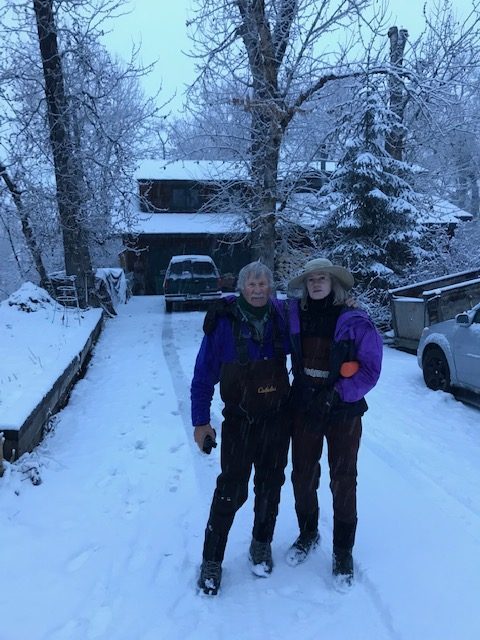