In honor of this past Sunday’s Holiday, Mother’s Day, we’re going to talk about Mom. This is fertile ground for an essay, since two of my main characters, Kate and Tiamat, were Moms with vastly different experiences. And since my wife, Linda, had a more difficult experience from most, as the mother of a damaged child. We’ll talk about that trio next week, in Mothers: Part 2; but I should start with my own mom. 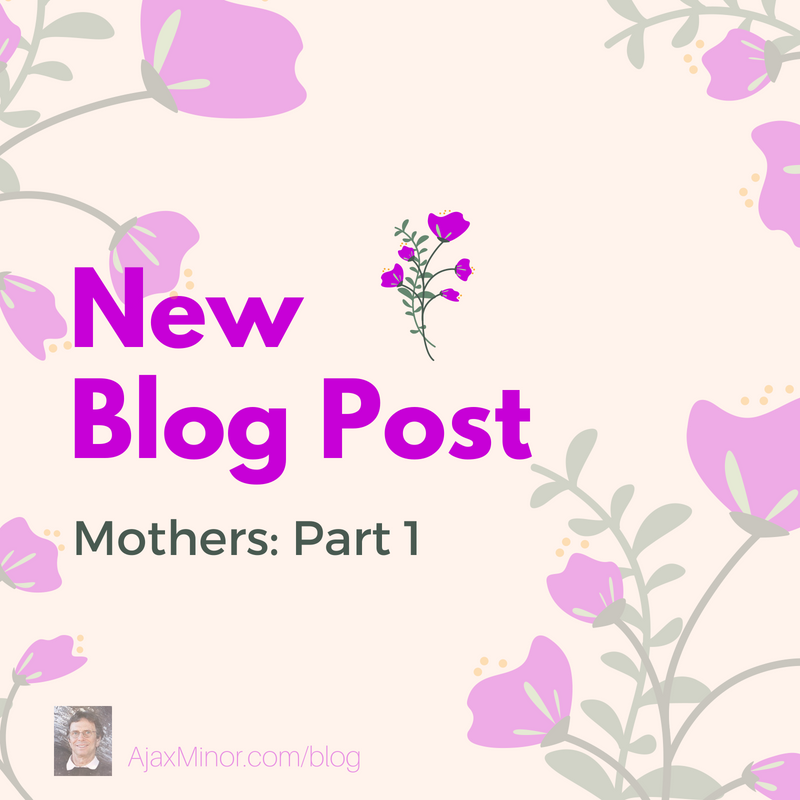 Whew! Relationhips with parents are complicated for some of us. Complicated in my case by alcohol. See my short story ‘Bohlmann’s Boozers’. Discussions often range far from the praises and encomiums delivered on Mother’s and Father’s Days for some of us.

When our daughter Katherine was born with a host of serious complications from her birth accident, Linda and I decided to seek counseling. It wasn’t as if we were unable to function. In fact, the reason we thought it wise to speak with a therapist is that we thought we were doing too well and might be setting up for more serious problems down the road. Linda didn’t relate to the first therapist recommended, so she went on to try a few more. It just didn’t work for her. At one visit, she told me that she ended up handing the professional a Kleenex and comforting her.

However, I liked the fellow we first met and continued with him for a year or more. Not surprisingly, we talked about my personal history.  I had a lot to say, especially about my problematic relationship with my dad. I’ll be writing about that next month, so we’ll just leave it there. In any event, we had a lot to talk about. But finally when he  asked me about my mother, whom he pointed out I had not mentioned, I drew a blank.  I really didn’t know what to say, since nothing salient sprang to mind.  My reaction, I thought, was odd.

My mother and I always had a good rapport, but I do not recall sharing any close physical contact. Her dad was from Wales and her Mom an old Connecticut Yankee.  Stiff upper lip and all that. I was very close to my maternal grandmother Jennie, whose name will be familiar if you’ve read ‘Sun Valley Moon Mountains’. I was close to all of my grandparents. But Grandma Jen and I never said ‘I love you’ until I was in college. Linda will often chide me that my mom must have tickled me with a feather as a child, since I’m not especially fond of hugs. I remember vaguely Mom reading to me as a child; an activity she complained about later to my sister. But she was always there for me after school or when I needed to be picked up at the movies. As for life lessons, my parents, and perhaps many of them from my conversations with other Boomers,  sort of left me on my own to sort things out. ‘The Greatest Generation’, having survived the Depression and a World War, felt they were owed some time to themselves. Hardly helicopter parents! More like the beer or martini would be served up after work, and parents were more like anti-aircraft batteries if we violated their space.

As I grew older my mother and I bonded some. I’d massage her feet for a quarter to buy a comic book, and she helped me with a couple of science projects. In high school, I was pretty much a grinder. But I’d unwind after a long day in classes with the ‘funnies’ and talk with Mom for a quarter hour before going up to my bedroom for four to six hours of homework. So we always had a relaxed, easy relationship.

A few years ago, I asked her if she had played sports in high school. I was interested, since I’ve spent my life trying to be an ‘average’ athlete. I thought maybe my problem was genetic.  She told me she had played basketball (which has always eluded me!) and softball. ‘What position,’ I asked. ‘Shortstop’ she replied. I had loved Little League but took refuge behind the plate and in the outfield. ‘Oh, it was easy,’ she said, ‘you just catch the ball and throw it.’ Say what?! I couldn’t imagine ever trying that position with my small, stone hands. I pressed her about her other activities. She had been Drum Majorette with the Hatters Drum Corps in Danbury, Ct. and had competed at the state level, winning some awards for baton twirling. She led the band and some call her ‘Skippy’ to this day. But she said, ‘I really didn’t like it. And I wasn’t really very good.’ I was shocked. Then she said, ‘In fact I never was really very good at any one thing. I wish I had some real talent like writing or painting or sewing.’

I protested but she pushed back. She was really serious. I had asked a few innocent questions and gained a window into her soul. Maybe we all should ask our Moms about themselves as people rather than thinking of them as performing a role. But I guess kids always think it’s all about them.